Reimagining BBC Radio 1’s Most Played Track of 1988 by The Adventures, Music 4 Ukraine Launches Star-Studded Charity Single ‘Heal This Broken Land’ to Raise War Relief Aid for the Families and Animals in Ukraine 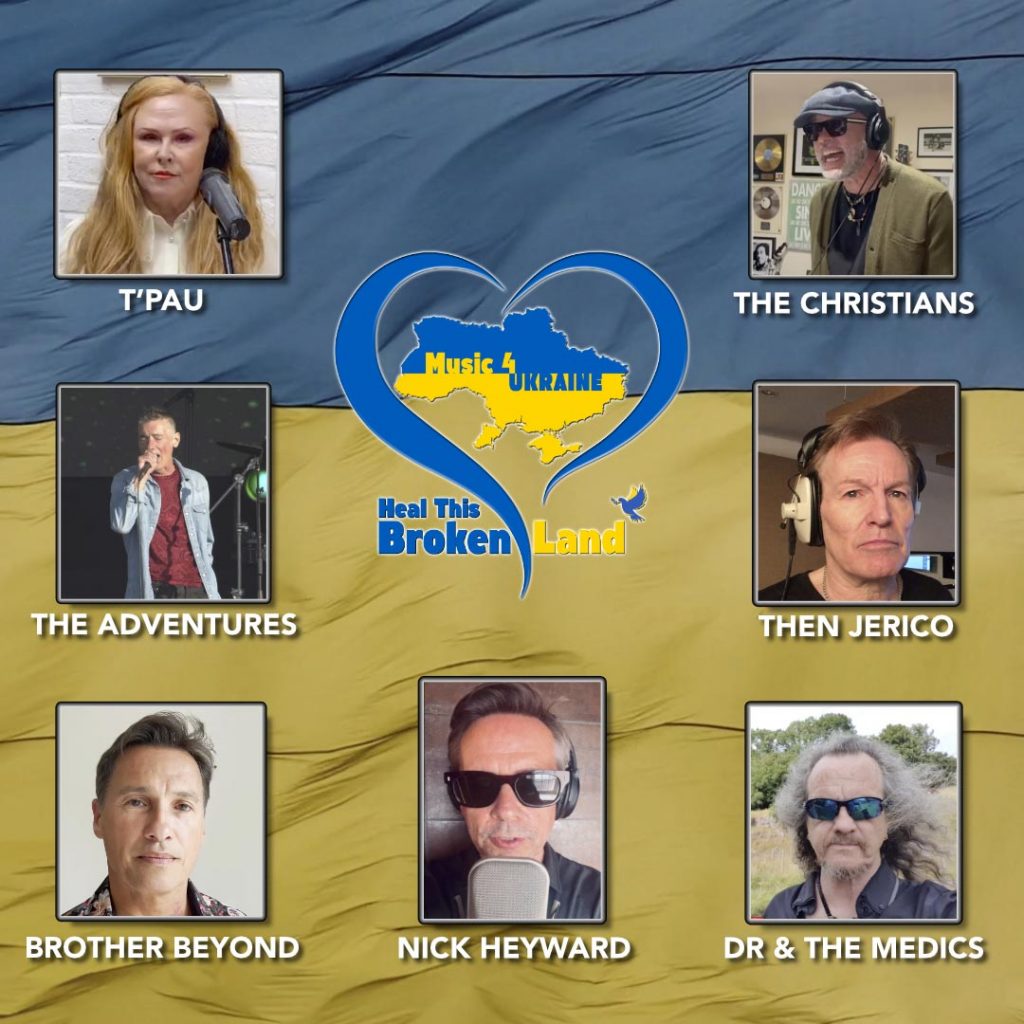 Music 4 Ukraine is releasing the charity single ‘Heal This Broken Land’ on Friday 30th of September 2022, accompanied by an official music video . The song is an ambitious rework of the 1988 hit ‘ Broken Land ’ by The Adventures, which was the most played track on BBC Radio 1 for that year and remains a firm radio favourite to this day. Originally written for the tragic events of The Troubles in Northern Ireland, the new version adapts its emotive theme, powerful lyrics and haunting melodies to reflect on the disastrous conflict between Ukraine and Russia, marking the 6 months since the beginning of the ongoing invasion.

‘Heal This Broken Land ’ features the original artist The Adventures and other iconic artists from the 80s such as The Christians , Nick Heyward, T’Pau , Then Jerico, Brother Beyond, Doctor and The Medics, as well as backing singers Kelly Barnes and Ben J A and accomplished production teams. The single received incredible reception on its symbolic launch at this summer’s animal welfare fundraiser Forever Young Festival to a crowd of 26,000 people, and has already confirmed the support of over 20 radio stations in Ireland ready to air the song upon its release and aid the cause.

The collaboration was brought to life by Dr. Sharon Alston, a veterinary surgeon, charity director and festival owner who shed light on the upcoming release:

“ Heal This Broken Land” is a charity single, released to raise funds and awareness of the desperate plight of the children and animals devastated by the horrific invasion of Ukraine by Russia. As the conflict rages on, orphaned children and pets need support and rehousing. Our mission is to raise funds and awareness to support the charities working in these heartbreaking and perilous situations .”

Dr Alston had already joined forces with other charities to get direct animal aid delivered into Ukraine. With the devastating invasion still going on, and inspired by artists she had worked with for the festival in the past, Sir Bob Geldof and Midge Ure , the charity collaboration became the obvious way to gain better reach and help those most in need. A timeless track delivered in the style of Band Aid , it perfectly captures the current wave of retro revival. The dedication and drive of everyone involved in the collaboration is entirely philanthropic, aiming to achieve everything that’s possible to help the people and animals of Ukraine.

Follow Music 4 Ukraine on socials to keep up to date on the upcoming release and possible ways to support the noble cause.

This website uses cookies to improve your experience while you navigate through the website. Out of these, the cookies that are categorized as necessary are stored on your browser as they are essential for the working of basic functionalities of the website. We also use third-party cookies that help us analyze and understand how you use this website. These cookies will be stored in your browser only with your consent. You also have the option to opt-out of these cookies. But opting out of some of these cookies may affect your browsing experience.
Necessary Always Enabled
Necessary cookies are absolutely essential for the website to function properly. This category only includes cookies that ensures basic functionalities and security features of the website. These cookies do not store any personal information.
Non-necessary
Any cookies that may not be particularly necessary for the website to function and is used specifically to collect user personal data via analytics, ads, other embedded contents are termed as non-necessary cookies. It is mandatory to procure user consent prior to running these cookies on your website.
SAVE & ACCEPT